I'm working on a YA novel set in a fictional boarding school in northern Ontario. One of the supporting characters (my MC's room-mate) is going to be Ojibwa and the last thing I want to do is play into all the stereotypes. The second-to-last thing I want to do is totally ignore her culture and pay lip service to her ancestry, while writing her as white. I'm currently reading up on Ojibwa history and culture, but am hitting a few snags. To wit:

1) One of the sites that I've visited talks about the importance of names and how naming a fictional character after a real person is disrespectful. Does that apply only to given names, or is it generally okay to take a surname that IRL is found in members of a particular Ojibwa band and slap a Western given name on it. (I'm thinking of calling the character 'Marianne Lastheels'. Lastheels is a surname I've come across in a book about the Mishkeegogamang band, but to the best of my knowledge, there is no RL Marianne Lastheels. There might be. Just like I have other characters who are not Indian named Kerri Palmer and Sharon Macklin and I can't swear that there is no live namesake out there. However, I am not intentionally naming my characters after real people.)

2) The character lives in the city (Sudbury), not on a reserve, although her paternal grandparents do live on a reserve and she's visited them from time to time. I'm not going to name the place and I'll be a bit vague on the location ("up north, not too far from _________") Many of the books I'm reading now talk about life on the reserve, history of a particular band, traditional dress, foods, etc. And I know that a lot does depend on the individual and there is as much a homogenous Indian identity as there is a homogenous Asian identity (and as much a universal Ojibwa identity as there is a homogenous American identity). Marianne (let's just say I'm calling her that for now) knows about her heritage and while she is fiercely proud of it, there are times when she wants to be just like the mainstream culture. There are other times when she wants to identify as Ojibwa. So... typical 14-year-old 'who am I and where do I belong' angst. I'm wondering how I can convey this without being too ham-handed about it. I mean, I can draw a bit on my own experiences growing up Jewish in a largely Roman Catholic Italian neighborhood for the sense of 'often belonging but often other', but I'm not sure about stuff like "What kinds of things might she conceivably bring with her to a boarding school that would show an awareness of/pride in her heritage, be believable for a 14-year-old, etc?"

I apologize that things have been very quiet around these parts. Hopefully, that means you're spending time thinking about what you're going to write about for NaNoWriMo, which is a mere 2 weeks away. I'll be doing of plenty of writing in November—I have five research papers to finish, so I'll be battling along with the rest of you.

Feel free to share your story ideas, and if you plan to do PiCoWriMo, which is the bite-sized version.

I know this community's tagline  is "If at first you don't succeed, try, try again," but sometimes, there may be times when it's better to put the pen down…;) 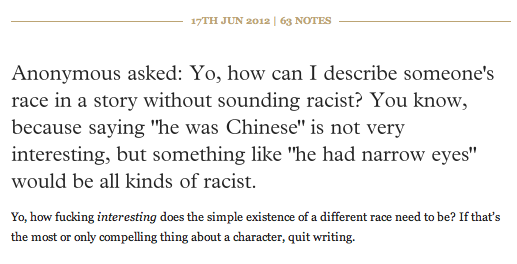 From Yo, Is This Racist?

Um, hello! I'm artist from Russia. I apologize in advance if my English is bad.
I'm writing a web-comic (well, more like visual novel, maybe), where most of main characters are PoCs. It's experimental work, combining traditional and flash animation with interactive elements, where reader should unlock secrets for fully understanding of story. This is very important work for me, I put almost year of my life on it (even created special alphabet) and I don't want if some stupid stereotype I'm not aware of will destroy everything! I made researches, but I'm still not sure if everything was covered. So, please, could you give me some advices and correct mistakes, if you'll find any of them?

If you have a time, please, read a first chapter here!
http://sta.sh/#stack=22v34u4lee5
It's unbetaed and probably painful to read, so I apologize again.
Thanks in advance!
I am currently writing an urban fantasy vampire novel. One the thing I'm doing is trying to subvert the 'normal' vampire novel with rich, ancient, mysterious vampires who are nearly all white and European. My protagonist and narrator isn't like that but he is white. Also I noticed many vampire novels if they have minority characters they aren't important This is the summary I give:

Al is 16 going on 91. Vampires are out of the coffin but with half a high school education from the 1930's he can only get a job as a cashier as Wal-mart. This story goes between his checkered past and his increasingly interestingly... present.

By out of the coffin I mean well Out to the public also other supernaturals have followed their lead these are: Werebeasts of all sorts (including the very rare Werekomodo dragon), Magic users and Icthyo Americans (a ethnic group of Fish people that's ripped from Lovecraft). My problem is I want to know where I've gone wrong. I expanded and tried to subvert the whole 'Shadow over Innsmouth' thing by saying that after Devil's reef was destroyed the villagers from Innsmouth were all shipped up an interment camp in the Adirondacks where cut off their source of power, they were made to do forced labor, experimented on and many were massacred All but the most 'human' looking children who shipped off a re-education boarding school, where they the government or put up for adoption. After they left the school the Feds had them settle everywhere in the country BUT New England and over the next eighty years they spread and bred with 'normal' humans of all races all over the country. Most of their descendants don't worship the old gods And now they are 'out' and Not only do they say Lovecraft was biased, they are demanding reparations and proper burial of their ancestors.

Well that's the world this story is set in I'm going to go through all the various supernaturals of color who have more then a walk on part and I want to know what I'm doing wrong, I really wanted to make it NOT racist. But a fried said I am doing just that I need help.

( Collapse )
And that's it well for now. I mention that the Master Vampire of LA is a Californio and is mistaken for more recent immigrant and the Master of San Francisco is Chinese a woman and because the time she was human has tiny deformed feet from when they were bound. But they aren't in this novel.

Is anyone planning to participate in National Novel Writing Month? This is the first year since I joined where I won't be able to because of grad school. Bummers.

Anyone else feeling daring? What are you writing about?

For those who haven't done it before—dooooo eeeeet. It's lots of fun and for perfectionist writer/editors (like me), it's a challenging, but liberating experience.

This is for a short fanfic set in the Forgotten Realms, which is a roleplaying universe full of shallow fantasy analogues to real countries in a vaguely medievalish era. Specifically, it's a Baldur's Gate fanfic, but it doesn't use any of the events from the games.

My main characters are one canonical character of colour, who comes from Fantasy Persia, and one character I've chosen to racebend to come from Fantasy India (more specifically, Fantasy Medieval Kashmir, where I want to set the story). The racebent character is generally assumed to be white and from a northern-European-esque background; the character doesn't have much of a backstory, but does quote the Bhagavad-Gita in canon.

For internet resources I've been looking up translations of the Bhagavad and historical poetry such as Lal Ded's, plus reading some books by Kashmiri authors. If there's anyone here interested in betaing I'd appreciate that, or any pointers to resources or any advice. I'd like to do this racebending and avoid being culturally appropriative. Shallow fantasy versions of real cultures can fall deep into that pitfall, but I also don't like the idea of ignoring entire cultures and continents when the Shallow Fantasy World is *canonical*. General advice on How Not To Fail is welcomed.

Also, more specifically, if anyone has detailed pointers on the cultural importance of the Upanishads and the degree of reverence that the writing ought to show toward those religious texts, that would be appreciated.

This isn't specifically about writing characters of color, but it's certainly relevant. Sorry if this is not the appropriate place for this. The mods are, of course, free to remove it if it's not. Also, dang this comm has a lot of redundant tags. :l

This one is actually for a fanfic. Harry and Cho have a daughter, and after some thought I've decided I want her to have a Chinese name (because she's born in China and at the time Cho doesn't really have any plans of ever going back to England or seeing Harry again.) but I'm having trouble sorting out what I can and can't trust on the internet with regard to Chinese names. Can anyone point me to a reliable list of common names in China, or, if that's not possible because of the Chinese language/naming system, explain how I can come up with a(n anglicized) Chinese name that doesn't scream "Did Not Do The Research"?
Collapse